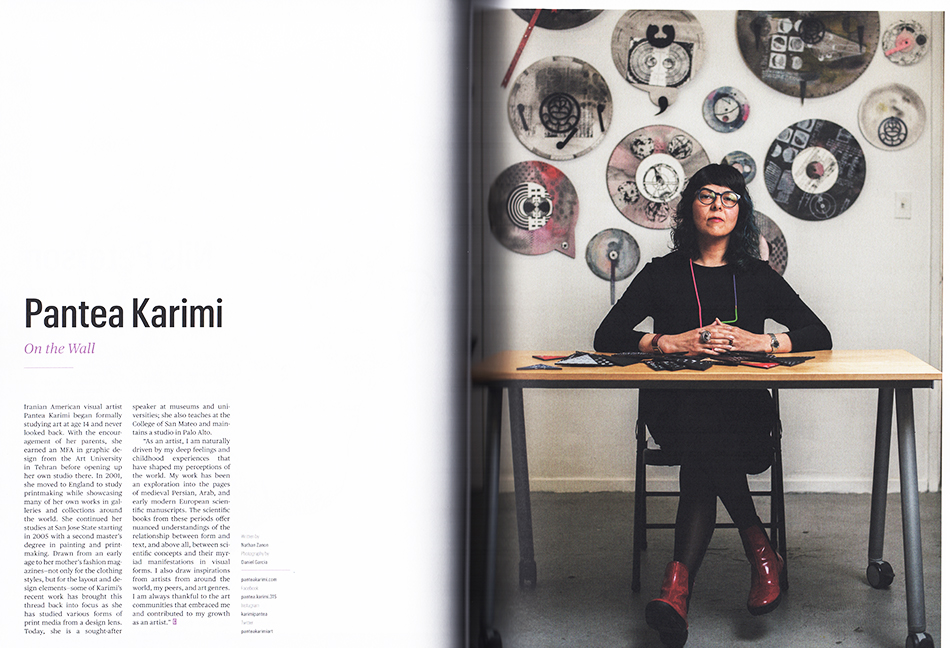 Iranian American visual artist Pantea Karimi began formally studying art at age 14 and never looked back. With the encouragement of her parents, she earned an MFA in graphic design from the Art University in Tehran before opening up her own studio there. In 2001, she moved to England to study printmaking while showcasing many of her own works in galleries and collections around the world. She continued her studies at San Jose State starting in 2005 with a second master’s degree in painting and printmaking. Drawn from an early age to her mother’s fashion magazines-not only for the clothing styles, but for the layout and design elements-some of Karimi’s recent work has brought this thread back into focus as she has studied various forms of print media from a design lens. Today, she is a sought-after speaker at museums and universities; she also teaches at the College of San Mateo and maintains a studio in Palo Alto.

“As an artist, I am naturally driven by my deep feelings and childhood experiences that have shaped my perceptions of the world. My work has been an exploration into the pages of medieval Persian, Arab, and early modern European scientific manuscripts. The scientific books from these periods offer nuanced understandings of the relationship between form and text, and above all, between scientific concepts and their manifestations in visual forms. I also draw inspirations from artists from around the world, my peers, and art genres. I am always thankful to the art communities that embraced me and contributed to my growth as an artist.”